I started my career at Computervision (CV) in 1992.  At the time CV was the world’s largest provider of computer aided design and manufacturing software. Computervision was best known as the title sponsor of the then Rover Group’s entry to the World Rally Series with their Metro 6R4 rally car in the late 1980s. This car and its livery became one of the most famous in the world of motorsport in the late 1980s. In fact I recognised the name Computervision when I applied for the role at the company on the back of seeing this car in the motorsport press five years earlier.

Computervision had been around for many years, helping companies to automate their design process using design software called CADDS.  This software was used by companies in the aerospace, automotive, high tech and industrial engineering sectors. My first role at CV was to build software demonstrations using CADDS software, I accompanied the CV sales team for a couple of years to help showcase how CV could improve design processes using this software. The examples below show various ways in which companies used CADDS to design their products, from Ferrari F1 cars through to Thrust SSC which holds the current land speed record. So you could say I had some unique insights into how companies designed their products.

In 1995 I was asked to lead a project to try and take CV’s solutions on the road. The Discovery Roadshow was born and we then spent two years travelling the UK showcasing CV software solutions in what became affectionately known as the ‘burger van’!  Essentially a large trailer that was fitted out as an executive demonstration facility and was towed by a Land Rover Discovery.  The image below shows a mockup of what the trailer looked like, unfortunately not many photos exist of the trailer in action, however it was a great way to get CV’s branding on the road so to speak and in front of customers.

My role at the time was to build presentations and software demonstrations around CV’s core software solutions. This included presentations for high level execs through to concept demos at analyst events such as Daratech. As mentioned above I started out building CADDS5 demonstrations, but quickly picked up other software such as data management and visualisation software.  Combining all these software solutions together allowed Computervision to introduce a concept called Electronic Product Definition (EPD).  It was a concept based around people, process and technology to show companies how every aspect of their design to manufacture process could be automated.

In 1995 I won a company award for the innovation I showed at producing high level EPD demonstrations based around customer data from Rolls-Royce, BAE Systems, Land Rover, Volvo Bus and Shorts Aircraft to name but a few.  Many of these companies went on to deploy their own EPD solutions. The Volvo Bus project was interesting as we used it to launch a new software product called EPD.Connect.  A tool that used the assembly structure of a product such as a plane, car or ship to manage design teams and allow them to work collaboratively on design information, whether CAD, visualisation, video or any type of unstructured information such as test reports etc.

With the success of introducing a suite of EPD demonstrations, I was then tasked with setting up an EPD Centre of Excellence, essentially an executive level demonstration and presentation suite which was located in the Coventry office. The facility and accompanying board room were designed to look like an executive lounge at an airport, somewhere executives would not mind spending a couple of hours of their precious time.  The centre proved very successful and was then embraced by CV’s Global Industry Group.  I moved across into this group to take CV’s EPD message out to some of CV’s biggest customers. The presentation facility was furnished with hardware from Sun Microsystems and SGI and utilised three presentation screens to deliver engaging executive level multi-media presentations. To support these presentations I learnt the tricks of the trade in terms of producing multi-media CDs so that we could give out to attendees as a record of their visit.  This included Powerpoint, video and graphics  production, skills which I still use extensively today.

We continued to build out the functionality of our EPD demonstrations and one thing I was keen to do was show the collaborative way in which companies could use the software.  In addition I embraced some of our consultancy projects and built these into our demo environments as well.  One such example was the Executive Information System, a ‘traffic light’ based solution that helped project teams and senior management to check on the build progress of complex projects.  The examples below show an EIS for an Airbus A340 and another for a McLaren Grand Prix car.  The EIS shown below is a perfect example of how I embraced this technology in the context of the whole EPD story. 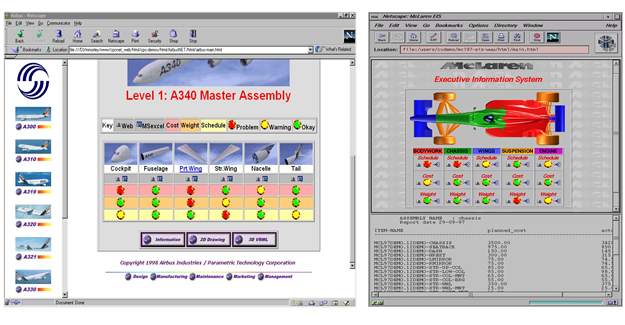 At the time, CV was a sponsor of the McLaren Formula One team and I worked closely with the team to understand how they used CV technology, primarily CADSS5 design software and then to build EPD demonstrations using McLaren’s data.  This was a great way to showcase our relationship with McLaren at the time.  CV enjoyed a long partnership with McLaren, we held regular factory tours, pit tours at the races and this helped to close numerous large deals over the years of the agreement.  CV had their logo on the engine cover of the race cars. CV also sponsored Penske Racing in the US at the same time, both teams being in an identical red and white livery.  This was my first exposure to the world of marketing and how companies could leverage sports sponsorship to showcase products and build executive level relationships with our customers at various hospitality and networking events.

I worked closely with McLaren over a period of five years and got to know the team members very well.  In the early days of my association with the team I managed to persuade the team to allow us to show a new piece of software in their VIP hospitality suite at the Grand Prix races.  VirtualStation allowed design engineers to collate different pieces of information on a multi-media page which could be subsequently marked up or red lined. This software was on the market during 1993 and at that time the internet was just starting to see wide spread growth and VirtualStation was almost made redundant due to the fact that it essentially operated in the same way as a web page in terms of being able to view text, images and videos etc in a single page format.

On the back of my relationship with both McLaren and Sun Microsystems I worked on a unique project to try and leverage the McLaren image in a successor to the Discovery Roadshow project from 1995.  In 1997 CV was taken over by PTC and one of my last projects at the company in 1999 was to introduce the Ultra Solutions roadshow, a marketing platform that allowed presales engineers to carry Sun Microsystems hardware in the back of a Mercedes MPV.  The outside of the MPV was fully branded to reflect the partnership with McLaren and the MPV provided PTC with a high profile way to showcase their partnership with the team.

In late 1999 there was some uncertainty with my role at PTC and I decided to leave the company to join McLaren as a Partner Manager working with the technology sponsors of the team. This role at McLaren cemented my desire to want to move into a marketing role full time and even though I was only at McLaren for a year, before returning back to PTC, it was one of the most interesting times of my career.